He studied at the Myrhorod Art and Industrial School (from 1913; lecturer O. Slaston), the Ukrainian Academy of Arts (Kyiv, 1918; lecturer O. Murashko), the Kyiv Institute of Plastic Arts (lecturer F. Krychevskyi), and graduated from the Kyiv Art Institute (1928 lecturer V. Meller). Since then he worked as a chief artist, 1935-1936 – head of decorative shop, 1941–1943 – artist of the T. Shevchenko Kyiv Opera and Ballet Theater.

From October 1940 to February 1941 he was the chief artist of the Gorkyi Theater of Musical Comedy (now Nizhnii Novgorod, Russia). 1943–1944 – at the Subcarpathian Theater in Drohobych (now Lviv Region).

He emigrated to Western Europe. From 1948 – in Canada. He had his own studio, decorated the scenery at Ukrainian institutions, including the Canadian-Ukrainian Institute “Prosvita”. From 1950 – artist-decorator of the UNA branch in Toronto, where he designed the scenery for productions: “Hutsulka Ksenia” by Y. Barnych, “Marusia Bohuslavka” by M. Starytskyi, “Viy” by M. Gogol, “Fairy of Bitter Almonds” by I. Kocherha. In the 1950’s and 1970’s he was involved in the church painting, in particular painted temples in Manitoba, Ottava, participated in the paintings of the Cathedral of St. Vladimir in Toronto. 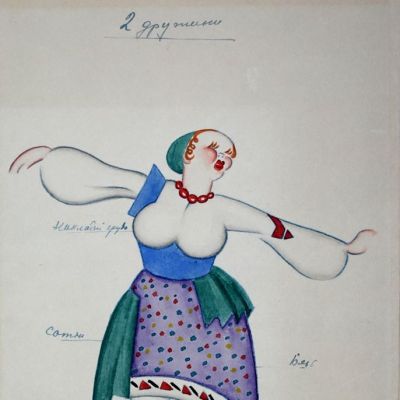